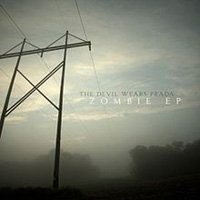 Widely considered one of the worst bands going (Blistering has avoided these guys like the plague, obviously), The Devil Wears Prada have enjoyed a continual upswing since their emergence in 2007, thus allowing them to do something “fun” like an EP. So here we have the Zombie EP, something that has been floating around Blistering HQ for the last several months, just dying to be reviewed. And despite all preconceived notions, it’s the not worst thing to hit our desk, so onward we go…

If TDWP is in fact, the (un)holy combination of all that is wrong with heavy music, then they’ve wisely decided to ignore the annoying facets of their music (i.e. annoying clean vocals, annoying keyboards, annoying beatdowns, annoying everything). With Zombie, they have opted for a straight-lined approach, something that makes songs like “Anatomy” and “Survivor” more bearable, although the clean vocals around the 3:15 mark in “Anatomy” are really grating.

Once a band’s reputation starts to precede itself, then it’s awfully difficult for those on the fence to ever come around, but if The Devil Wears Prada wants to start going in that direction, then they’d best be advised to continue with what has been started on Zombie. Not like we’re giving these guys a thumbs-up or anything, it’s just one of those rare moments when something that is expected to suck, doesn’t suck. Guess that would be Zombie.