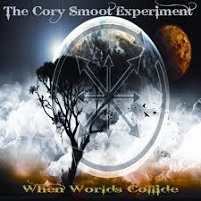 The November 2011 death of guitarist Cory Smoot rocked the world of GWAR and metal. Largely responsible for their post 2004 War Party output, Smoot’s portrayal of the Flattus Maximus character led band leader Dave Brockie (aka Oderus Urungus) to say Smoot will forever be remembered as the “true Flattus Maximus.” Fittingly, all proceeds from sales of When Worlds Collidewill be donated to Smoot’s family. To make a donation to the Smoot family (or buy the album), click here.

Originally intended as a concept album titled Religion is Fiction, Smoot had hoped to snag Urungus and Lamb of God singer Randy Blythe for some guest spots. Due to scheduling conflicts, that didn’t happen, so Smoot proceeded to handle all instrumentation and vocals. Unsurprisingly, Smoot is quite the adept musician (one would have to be in order to play with GWAR due to the elaborate costumes), and the songwriting is reminiscent of modern GWAR, which is a nice tie-in.

When Worlds Collide effectively volleys between aggressive thrash (“The Blood Red,” “Religion is Fiction”), bruising, sludge-like romps (“Unfortunate Sun,” “Rebirth,” and “Countdown to Oblivion”) and melodic plunges (“Brainfade,” “When Worlds Collide”). Smoot’s vocals fall right in line with Brockie’s, and while not as animated, have plenty of attitude and character to them.

Even without his untimely passing, The Cory Smoot Experiment would draw some attention based solely on Smoot’s stellar musicianship. It’s not hard to picture When Worlds Collide connecting with the vast and extremely loyal GWAR contingent. Fare thee well, Smoot.