The Clan Destined – In the Big Ending (Hammerheart Records) 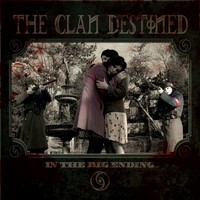 One of the real wordsmiths/poet laureates of metal is Martin Walkyier. Best known for fronting cult British thrashers Sabbat in the late 80s, then folk innovators Skyclad throughout the 90s, Walkyier’s quick tongue, immaculate grasp of the English language, and cunning wit are unrivaled, particularly in this day and age where lyrics are pretty much an afterthought. Some the prose found on Sabbat’s Dreamweaver are some of the finest thrash had ever seen, capped off by Walkyier’s staccato, rapid-fire delivery that is instantly identifiable. Such traits (including those found during Skyclad’s glory days) carried over to his third band, the short-lived The Clan Destined, whose sole effort In the Big Ending, is getting the proper release treatment from Hammerheart.

Walkyier formed the band with former Immortal bassist Iscarioh in the early 00’s, but due to disagreements, The Clan Destined never got off the ground before it could. In the Big Ending (hope you’re getting the wordplay) is a six-song effort that triumphs upon Walkyier’s folk and thrash roots, coming up with a unique batch of hummable, infectious tunes. The obvious choices would be opener “Swinging Like Judas” and the upbeat “A Beautiful Start to the End of the World,” featuring one of those rag-tag, immediate chorus choices Walkyier did so well during Skyclad. Moreover, “I Am Because We Are,” documents Walkyier’s strident worldviews, many of which are of the common-sense and humanist variety, something we all can use given the state of the times.

A bit of a shame The Clan Destined never got off the ground. Certainly a worthy successor to anything Skcylad has done post Folkemon, In the Big Ending is rightfully deserving of a proper release. And whether the always-creative Walkyier has more tricks up his sleeve remains to be seen, but this is a quality inclusion in the man’s wide, and ever-varied catalog.