The Brood – The Truth Behind (Give Praise Records) 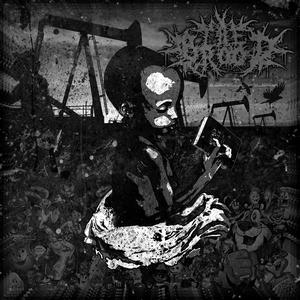 In a genre often noted more for its abrasion and intensity rather than subtlety, grind doesn’t need to use melodies or intricate patterns to get a point across. It’s a gut-punch, a quick reflex, and with many bands, has a criticism of society, government, or both. The Truth Behind may not serve to reinvent the wheel, but it’s grinding hardcore that does right by its premise.

The Brood’s ode to grind takes a number of hardcore approaches and sprinkles in some punk, death, black, and crust to add dimensions to it. By and by, it’s a brutal approach that effectively takes the ‘bull in the china shop’ method and runs with it. “Barbie Voorhees” exemplifies this early in the album with a near-constant barrage of blasting, chaotic riffs, and barked commands that leads directly into its follow-up, “Of Guts and Fire,” which does take a few moments of groove into account – keeping the feeling of deja-vu at bay. Gang vocals in “Seeds of Demise” and a more hardcore feel offer a different but none the less intense display that fits right in with the album’s mantra. Short atmospheric cuts like “Free Range Meat” and “Latent Dementia” also serve to provide the listener with a short pause, before blistering songs like “Mindfuck” and “GIL” ratchet up the intensity once more. Closer “Repeated Slaughter of the Undead Cunt” sends things off in fine form, working in the crust and black influences with equal measure and no shortage of energy.

Those who enjoy grind or darkened hardcore will find plenty of appeal with The Truth Behind. The Brood have a firm understanding of what makes the genre tick, from the brutal and assaulting riffs to the fervent intensity. 15 rapid fire songs that cut to the bone and are sure to fire you up.