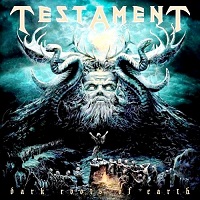 The fact Testament didn’t follow up 2008’s Formation of Damnationright away has served them well, for by all indications, demand for the Bay Area thrashers hasn’t been this high since Practice What You Preach was all the rage. Dark Roots of the Earth doesn’t disappoint and it’s not like anyone thought it would – left-hand turns or experimentation have never been a part of the band’s vernacular. In essence, it’s a modern

day version of the aforementioned Practice…, which should make pretty much everyone happy.

The only change from Formation to Dark Roots is in the drummer stool, where drum maestro Gene Hoglan (Dethklok, Dark Angel, Strapping Young Lad, etc.) has taken over for an injured Paul Bostaph. Hoglan’s influence is evident across the board, where his fluent style and extremity end up bulking up songs

like the excellent “Native Blood” and “True American Hate” via blast-beats. And considering this is the first time such beats have appeared on a Testament album, they cause instant waves.

Because of the mid-tempo, quasi-melodic spirit of songs such as the title track, “A Day in the Death” (which opens with a bass run ala “Perilous Nation”) and “Throne of Thrones,” one can easily

drop in the Practice What You Preach Comparisons. In fact, this is probably where Testament is at their best, with Eric Peterson’s searing riffs and Alex Skolnick’s ever-adventurous solos (see: “True American Hate”) basically romping around with youthful exuberance and maturity. Extra kudos for the inclusion of the ballad “Cold Embrace,” which makes the band three-for-three in ballad territory: “The Ballad,” “Trail of Tears,” and “Cold Embrace.”

Testament has made it almost too easy

on a lot of us. They’re probably the Bay Area’s most creatively-viable band without a blemish on their record, andDark Roots of the Earth drives home

that point. Will be interesting to see if Chuck Billy and the boys decide to tour for three years off this thing or will try to head back in the studio. Momentum is definitely on Testament’s side.