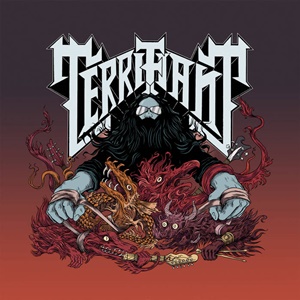 Uniting forces converge at a festival, birthing a new Belgian heavy metal act in TerrifianT. Solidifying their lineup in 2018 while taking ideas of what they wanted to execute from their raw NWOBHM and USHM favorites in their record collections, we get a self-titled full-length that makes no apologizes for its raw spirit and punishing passion for the purity and sanctity of the genre. Those expecting pristine, polished songs and sterling production will run to the hills, as the quintet prefer to keep these eight tracks down to earth, aligning well with those early 80’s bands who poured their energy and electricity in unbridled collective affinity to their craft.

Expect start/stop twin guitar action from ZZ Slop and Slime Valdi that rivals early Metallica making “Bed Queen” an early favorite, the wild shrieking voice of Lord Terrifiant a mix of everything from a younger King Diamond to Thorsten ‘Toto’ Bergmann of German underground speed/thrash mavens Living Death. Musically the riffing, hooks, and solid to the bone rhythm section activities sit in that prime time NWOBHM or early USHM window – when bands like Jaguar, Blitzkrieg, Satan, Cirith Ungol, and Jag Panzer gained attention from fanzines and tape trading maniacs craving that next hot sound. It’s hard not to pump fists and don the requisite leather jacket when hearing the alluring lead breaks and pounding tempo of “Just Because I Can”, while the 7:15 “Iron Mountain” commands headbanging antics right from the get go, the gallop nature of the riffing and unison snare/kick giving chase to some solid speed riffs and twin harmony guitar sections plus fiery lead breaks as the haunting background ‘ah…. Ah… ahhhs’ and supplementary organ work reverberates in the recesses of your brain. Closing the record is “Heartbreaker”, the Pat Benatar hit from the late 70’s – given a bit of that punishing metal slant as Lord Terrifiant changes up the vocal melodies through his haunting cackles and almost Alice Cooper-like persona in spots.

We need more bands like TerrifianT in our lives – rough around the edges but unmistakable in their execution to the early days of heavy metal. Sure to scare the parents and delight the old school derelicts in us all.