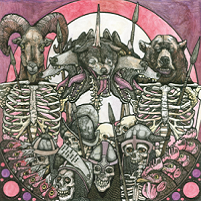 Terminus have put forth a very ambitious record with the release of their self titled debut. Released on the relatively new Mutants of the Monster label run by CR of Rwake, it’s a fitting pairing. Terminus hail from Arkansas and bring some southern swagger, but it’s far from your typical southern rock-influenced metal. Extremely progressive and all over the map stylistically, Terminus manage to make it work in their favor for the most part.

The first track on the album, “Gardens” is a straight-forward melodic rock tune but veers off into prog territory with tastefully extended solos and riffing. “Leatherneck” opens with a huge southern-sounding doom riff that then tears into an up tempo groove that gets the blood pumping and the head nodding. At nearly seven minutes long, “Seven” mixes equal parts Mars Volta and Rush as they go from frantic and chaotic to lush and calm with over the top vocals that fall somewhere between Cedric Bixler and Geddy Lee. “An Ocean of its Own” is an instrumental track that oddly mixes black metal and prog with surprisingly fascinating results.

It’s hard to come up with a comparison as there is so much going on and they move between different styles and sounds, but if I was going to make one, a band like Kylesa would be a good start. Heavy but with memorable and melodic hooks to go along with the huge riffs. It is definitely far from perfect, but coming from a three piece where the members are barely of legal age, Terminus is a very strong record and shows a lot of promise. With a little more focus and age, I expect to hear great things from this group of teens in the future. Definitely a band to keep on your radar if progressive metal is your thing.