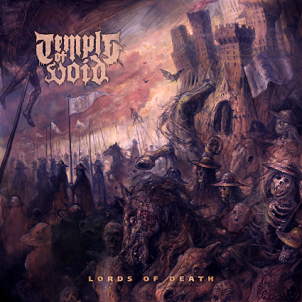 Whatever the ultimate effect of doom-stricken death metal (or is it “death-stricken doom metal?”), it has been proven bands can retreat to the glory death days of yore without maximum redundancy. It was getting a touch hairy for a stretch when the short-lived throwback death metal “thing” happened (i.e. bands aping Autopsy, Death and Possessed at will), but the push from labels like Dark Descent and Profound Lore for bands of the abyssal, undeniably dark quality has won the day. Shadow Kingdom outfit Temple of Void falls into this category, throwing their weight around capably on their Lords of Death sophomore foray.

There’s not as much simplicity going on with Temple of Void in relation to their contemporaries, whether that’s a function of the band’s often criss-crossing riffs or the fluid nature of their compositions. This would be most apparent on “The Hidden Fiend,” which emerges as more than your standard death metal riff dump. The old-school, if not Paradise Lost circa 1990 plunge of “The Gift” is the obvious winner here, with brazen, choice use of space and dynamics in the form of clean-channel guitars and a lead melody that would make Mr. Greg Mackintosh proud. Lest we forget the quick, too-brief clean vocal take from Mike Erdody, who spends a good chunk of the album bellowing like he’s from some distant netherworld.

With a stated Asphyx, Bolt Thrower and Incantation quality, Temple of Void are more than the sum of their parts. Lords of Death packs the ideas in and shuttles them out with little meandering, thus, keeping with the band’s classic death metal ethos. Ultimately, though, Temple of Void have embarked on a path that in a few albums time, will be their own to blaze. 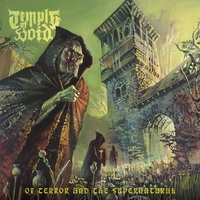