Wednesday, 21st May 2014 By Bridget Erickson 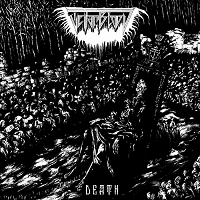 Triggering terror, evoking nightmarish spirits, and causing horrific ambiance everywhere they turn, that’s how Spain’s Teitanblood roll. In a word, their new album can basically be described by its title – Death. In Death, there’s no light, serenity, nor mercy, but there are all the macabre and cadaverous things we find in literal death and accordingly in death metal. Once the record is playing, there’s no return and no escape from its convulsive darkness.

“Holy hell!”  is an appropriate thing to say once the play button is pressed, because within seconds, the first song, “Anteinfierno,” instantaneously sweeps into a violent whirlwind of fast-moving, hard-hitting blackened death metal. In “Plagues of Forgiveness,” a raging heat like fire emits from the beats of the tempestuous drums as if the recording took place in a ritual of some sort, where there’s an inexplicably eerie and darkly impure sacredness present. The phantasmal “Cadaver Synod” is so very gruesome and ghoulish, some might render it as terrifying.

The last track, “Silence of the Great Martyrs,” has an unstably obscure atmosphere where the abysmally raw vocals bellow beneath the weightiness of leaden tones, until all simmers and settles into fine sediment, gradually fading out and dying to silence. But just when you think the song’s over, it resurfaces by a bell’s hollow tolls, then puts an end to its long procession with ethereal whispers and somber chanting. At 16 minutes, it’s the lengthiest of the seven songs. All this, and more, tallying to over an hour long of mesmeric listening filled with sonorous bass lines that rumble in wilted-like rhythms alongside speedy, swiveling, thrashy guitar riffs, producing groovy and bottomless musters of sounds, makes Death Teitanblood’s longest and most elaborate album ever.

The dense, murky pessimism seeping from these songs is overwhelmingly suffocating, and because of that, are all the more irresistibly immersive. Listening to Death is like diving into a great body of black water and drowning in it, while enjoying every second. Saying its heavy would be an understatement, better to say it’s what gives headaches to old people and frightens small children.