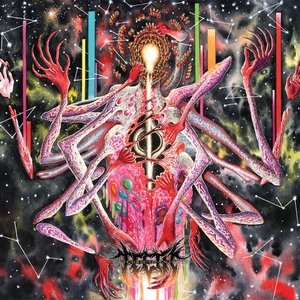 It seems as if it’s been a hot minute since there’s been a real skrony, dissonant death metal album to sit down with. But just given the cover artwork of The Curse of Entropy, you know you are going to be getting your weird on when you dive into Teeth’s second full-length effort. Coming 5 years after their debut (they did have two splits in between), the band has evolved a bit from the doomier side of things and further into the more devastating and extreme side.

While it’s quick to notice the impact of bands like Ulcerate and Gorguts (of which Luc Lemay does contribute guest vocals on “Husk”), Teeth tends to stick out on the dissonant side of things for their more focused and direct attack. The opening of the album begins with full-out grinding madness with blasts and winding riffs on “Enlever” and really doesn’t let go much after that. It’s frenetic, and other songs like “Blindness” and “Collapse” will easily back up that claim. The grinding elements and short track runtimes (about 2-3 minutes for most) ensure that the band will deliver a swift kick to the jaw. But at the same time, it’s surprisingly well-layered in tone. The band knows how to slow things down and ‘get weird,’ so to speak. More snarling dissonance enters at these intervals, with a menacing and otherworldly presence as more labyrinthine and eerie riffs attempt to engulf the listener, such as on the aforementioned “Husk” and “Cretin.” It’s the merger of these two worlds that is the most impressive for Teeth, being able to swirl in some darkness and despair or just piledrive the listener at a moment’s notice. There’s no jarring transitions either – it’s a fluid experience that revels in chaos and creepiness.

Equally explosive in tone and bleakly dissonant, The Curse of Entropy is a solid experience for those into the stranger side of death metal. It packs a ton of punch behind it, which should be enough to separate them from the more atmospheric bands that tend to come out of the woodwork in this particular subgenre.