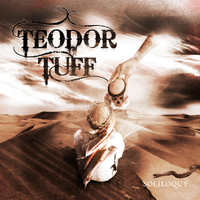 Rooted in bombast and flanked by the underrated shape-shifting of Nordic power metal, Norway’s Tedor Tuff have created one those albums that carefully straddles the line between full-on symphonic applause-seeking and the richness of pure melodic metal. By not adhering to any sort of actual guidelines, the Norwegians (who are comprised of a set brothers) make a strong play for one of the year’s more unconventional offerings. And given by the goofy nature of their name (what is a “Tedor Tuff?”), it all falls into place on Soliloquy, their sophomore album.

Right off the bat, the band does an instant bait-and-switch by employing operatic female vocals on “Godager,” which is the only dip TT takes in the all-out symphonic metal pool. It’s the first in a long line of bold moves, yet there’s a noticeable cohesion amongst the album’s running order, most of which has to do with singer Terje Harøy’s pitch-perfect vocals. Even though it’s not divulged in the bio information provided to us, it appears as if Soliloquy has some type of concept about some type of dude with a Jesus-like story. This probably explains the talk about animals and other ethereal doings on “The Last Supper,” “Delusions of Grandeur” and “Mountain Rose.”

A cavalcade of guests make their way onto the album, including Annihilator shredder Jeff Waters, Mercenary lead guitarist Martin Buus, and Freak Kitchen’s Mattias Eklundh, all of whom are showcased on “Heavenly Manna.” And unless Terje Harøy can magically turn his voice into a female, we reckon Triosphere’s Ida Haukland pops up “Addiction,” which naturally, is the album’s best cut mainly because Haukland is such a dynamic vocalist.

As soaked in all of the prissy elements that are usually easy to bag upon for melodic metal it happens to be, Soliquoy’s pacing, penchant for drama, and high-rate jams make it a winner. Tedor Tuff haven’t quite mastered dramatic metal, but man, we’d take these lads over Kamelot any day.