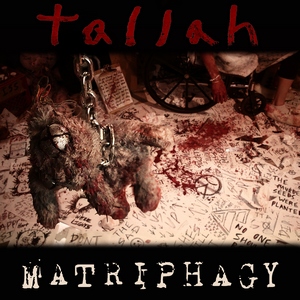 What’s old is nu again right? In a rather interesting turn of events, there have been more bands taking direct influence from the nu metal style, and surprisingly making it something more tolerable. Much of this tolerance comes from how heavy and aggressive it manages to be. Something that Tallah seems to understand with Matriphagy, even if their shining moment lies further in the future.

The band’s biggest claim to fame is that of drummer Max Portnoy (son of Mike Portnoy of course), but there’s no resting on laurels for the act. The band frequently comes across as being explosive and on the verge of being unhinged, and frankly, that is where most of their appeal comes from. Dipping and weaving from blastbeats to nu metal inspired grooves at the drop of a hat, off the bat with “No One Should Read This” is sure to get the attention of many. As will the crazed vocals of Justin Bonitz, who screams, shouts, sings, and growls his way across each track – not to mention some rappish moments (see “Kungan”). He may sound like the most unhinged portion of the act, but it works well within the context of the band’s music. You can plainly hear the electronics at play a la early Slipknot, as well as some KoRn riffing, but don’t balk at the band just yet. The incorporation of these elements are augmented with some extra heaviness to them and it actually aids in giving the album more bite. “Overconfidence” nails all of these points, but tosses in some hardcore breakdowns and driving riffs to play off some some eerie atmosphere and bottom heavy grooves.

The album’s length ends up working against it slightly, with the feeling of redundancy starting to weigh in despite the often sporadic and crazed attacks in the music. Matriphagy sits at about 53 minutes and feels like a trim of at around 15 would make it much more digestible for such a rage-generating effort. There’s just a little too much battering going on, and a few tracks suffer from this too (“Too Quick to Grieve”). But that said, there’s a place for Tallah and their modern take on nu metal infused with hardcore. Matriphagy lays down a foundation for the band to capitalize on with their next steps.