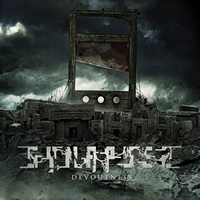 Having a bit of a soft spot for aggressive and relentless metal, this seemed right up this writer’s alley. The sophomore effort Devoutness by Italian death metal band Synapses takes all of the necessary elements of modern and technical material and compiles them admirably. But is it enough to make people take notice?

There’s really not much that one can fault in terms of the writing of Devoutness. All of the bells and whistles that you would expect are here. Synapses fire off rapid, frenzied riffs with a technical-but-not-too-technical bend, blistering drumwork, and inhuman bellows. They also know how to add in just the right amount of groove (a death metal necessity) as heard in songs like “Day of the Past.” The problem is that everything just feels too ‘by the book’ so to speak. The vocals don’t really change much over the course of the album, becoming one-note. The riffing seems so clinically cold that it seems that machines could have helped write it. As the album moves along, there’s just not enough feeling to give it that lasting power that similar bands have. The only spot that doesn’t feel this way is the groove. Groove is the band’s clear forte, and if nothing else, moments of tracks like “Sacrilegious” and “Legates of Tyranny” break free from the coldness that otherwise permeates the album.

In some regards, Synapses has all the elements to succeed. But the coldness and near-mechanical aspects keep them from getting all the way there. A stronger focus on groove might help things with future offerings, and give Synapses more room to grow. All things considered, only real die-hard tech death lovers are going to really get into this one.