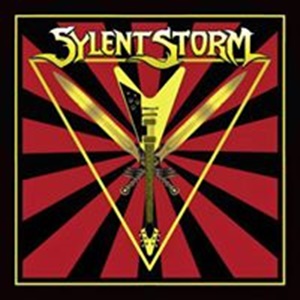 There’s something magical about the power trio format in metal. Stripped down to its essence, all parties are on top of their musical game to fill out the sound. Oregon act Sylent Storm are a three-piece where the drummer Jym Harris is also the main singer – as guitarist James Lind handles background vocals, while bassist Matt Foster completes the lineup. Together since 2013, they’ve issued their first recording – a six-song EP that lives for a traditional metal era of the 1980’s when the scene was bursting across Europe and North America.

What’s immediately apparent is the production values and tones subscribe to an older, analog/live in rehearsal room aesthetic. You can feel the distance in the snare snap, kick drum, and primitive guitar sound throughout – making it almost maintain this hidden demo quality that could easily make the listeners think these songs come from 1983 and not current times. The songwriting has a lot of NWOBHM and early American power qualities – cultural licks/hooks permeate “Eye of the Storm” in an Iron Maiden/Tokyo Blade manner, the chorus perfect for audience participation while the tempo shift properly connects to unison headbanging activities. Jym as a vocalist sustains a lot of high range falsetto action, but also has a purity to his mid-level capacities that works on the anthem “Patriots of Metal”. The band also crank out the early Omen cut “The Axeman” as a tribute to this California band, properly showing respect to their elders. It’s interesting that Sylent Storm chooses to end the EP with an instrumental version of the first song – just renamed “Gaelic Storm” for the purposes of differentiation.

Conflict arises in full recommendation of this EP. There’s no disputing the passion and ability of the musicianship on display – Sylent Storm understand the necessary hooks, harmonies, and songwriting flow to achieve stellar traditional metal output. You just wish the production values and tones would be a little stronger the next go around – as an act like Night Demon can provide for today’s generation. Proceed at your own pace, as there are ardent people who will flock to this easily.