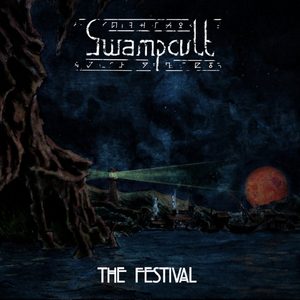 When it comes to literary influences on metal, few are more relevant than H.P. Lovecraft. Particularly in the more extreme genres, where band names, albums, and cover art frequently bear a Lovecraftian influence. The Netherlands own Swampcult take things a little further in terms of those influences, as The Festival is a concept albumbased on Lovecraft’s story of the same name – bringing it to life with both music and lyrics.

A real tough egg to crack in terms of sound, Swampcult have a doomy vibe that swirls together with elements of black and death metal. Darkened and fuzzy riffs own the landscape, with some occasional upticks balancing out the sinister vibes. In fact, Swampcult is one of those bands that really excel at being able to trudge through the mud as opposed to annihilating everything around them, and the album’s strongest moments are when they are slogging (see “Chapter VI: The Flight”). But don’t let that make you think it’s an easy fit – The Festival has a more theatrical feel than anything else. Some of this is due, in part, to the most polarizing part of the band – the vocals. Somewhat gruff, but sounding almost like harsh spoken word vocals in some regards, the vocals mostly stick in a range some may find tough to bear for the entire album. Unique certainly, but not for all by any means. Call it an acquired taste.

While the vocals may not be for all, Swampcult have launched an ambitious concept album that does ultimately succeed in creating a true Lovecraftian atmosphere. The weight of lumbering doom riffs is heavy, with a solid atmosphere, and the theatrical elements may draw the band towards a specific crowd that will move them to the next step of their evolution.