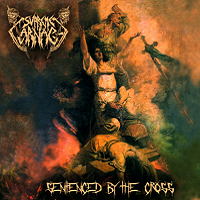 The long-term, seemingly endless pining for death metal days of yore is reflected equally in the bands who have kept it “true,” and the ones who are just learning how to do so. While there’s no official manual on how to co-op vintage DM, you’d have to think creative flexibility is an afterthought when applied to bands like Supreme Carnage. A Muenster, Germany outfit who formed in 2010, the band has a 2013 self-released album to their credit, along with the album in question, their sophomore Sentenced by the Cross.

Simply lovely cover art, to start, depicting the “Trial by ordeal,” an ancient judicial practice by which the guilt or innocence of the accused was determined by subjecting them to an unpleasant, usually dangerous experience. Yikes. Nevertheless, Supreme Carnage’s immovable, hulking death metal relies on whatever the notch is right above “bare-bones” simplicity. Their riffs can rollick along – just get down with the crunch-boogie on “Right of Sanctuary,” the album’s most propulsive cut. A lot of those dis-harmonic melodies tend to creep their way into the band’s sound, many of which preferred by the initial guard of death metal, meaning, they’re just re-packaged for 2015, as so heard on the album’s title track and “One Pound of Iron.”

On occasion, it feels like vintage-by-way-of-current death metal feels truly regressive; you know, like playing it really backward and crass. Supreme Carnage doesn’t give off such a vibe, preferring to work in the threadbare confines of old Autopsy, Bolt Thrower, Gorefest, and Grave. And that’s usually the hiccup with albums like Sentenced by the Cross – there are too many references points to the bands Supreme Carnage have patterned themselves after to aid the Germans in making any kind of case of their own. And the cycle goes on. 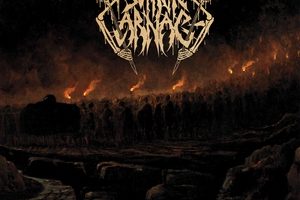