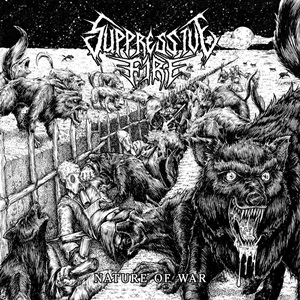 When a self-financed, underground metal band starts to gain momentum through hard work, promotion, live presence, and media attention, good things usually happen. Such is the case for Raleigh, North Carolina’s Suppressive Fire – as their previous full-length Bedlam gained high praise on blogs and webzines across the globe (including here), so much so that Lost Apparitions Records signed the group for their follow up Nature of War. Describing their sound as Teutonic-oriented thrash metal may seem a bit confining, as there is a raw and blackened aspect to their approach on all fronts, vocally and musically – as well as conscious appeal keeping the production and tones very natural and down to earth.

This go around, these eight tracks fence sit between riffing and lead breaks that certainly possess a lot of old Kreator/ Sodom spirit, while the rhythm section chugs and grooves along in a cross-pollination blackened crossover style that has a lot of Skeletonwitch and Goatwhore power behind things. The band can move from straightforward parts that pound your skull in, then blast away as the guitar runs and vocals aim to cut sharp to the bone – check out “Violent Enlightenment” and the title track for the turn on a dime feel. The ride cymbal and pit-maneuvering mid-tempo chord stomps are as natural as the relentless aggro-punk meets Slayer charm for the under two minute “Depraved”. Choosing to expand some of their horizons into more of a traditional metal outlook for the Mercyful Fate-like “No Man’s Land”, guitarists Joseph Valhal and Aaron Schmidt lay down some evil riffs that maintain the macabre/dark atmosphere even when the pace picks up midway through.

Loosely exploring a few World War I themes in the lyrics, the band also give the listeners some bass leads and catchy twin refrains during the 8:56 “Dreaded Bastards” – a roller coaster number that gives new meaning to the term ‘epic’. Toxic Holocaust legend Joel Grind handles the mixing and mastering duties for Nature of War – a smart decision to aid the dynamic offering that much more sonic punch. Unison background vocal support that doesn’t sound too overused and mixing up the tempos even in the second half of the record allows Suppressive Fire to be versatile in creative thoughts and make the blasts or blitzkrieg parts stand out.

Sincerity goes a long way in metal – Suppressive Fire live and breathe for a style that will never die as long as the musicians take their craft seriously with integrity. Another brilliant outing for sure. 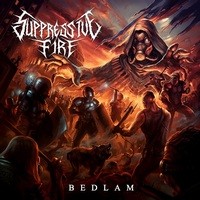