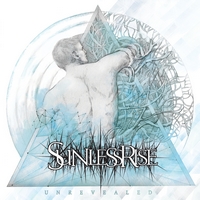 In this day and age, it’s become harder and harder for a band to simply come out of nowhere and floor you with an incredible album. Yet that’s exactly what Russia’s Sunless Rise has done with their debut, Unrevealed. This is a concept album with a rich story that is going to make a number of melodic death metal lovers turn their heads.

Despite working within the melodic death metal framework, Sunless Rise still manages to feel fresh from start to finish. There’s a lot of guitar theatrics going on, with some clear nods going to Children of Bodom, Wintersun, (older) In Flames, and Dragonforce. There’s never a dull moment on this front, with each song seemingly packed with addicting riffs that never fail to connect and sometimes melodically intertwine with the synth presence. The music is frequently fast, and there is a complexity to the riffs that you will hear more and more as you continue to delve deeper into each track. From the rumbling basslines of the title track, to the speedy harmonies of “Lost Path,” to the pummeling thrash of “The Burnt and the Frozen,” it’s tough to keep a favorite for more than a few listens. There’s some real rippers in the solo department as well, which add some added electricity to the proceedings. Then there’s the vocals, which still fall under the realm of the standards, but are nonetheless an important piece. Screams, rasps, and cleans all fit the bill, and the clean vocals have a more power metal-esque approach than the usual, commercially-driven ones. Check out “Recovering the Truth” for a good example of how these aspects all combine together for an excellent chorus.

Exceptionally well done songwriting for a debut album, Sunless Rise is bound to have the melodic death fanatics eating out of their palm soon enough. Unrevealed takes the best aspects of the genre and amplifies them to masterful levels. The type of album that you can play and play until you’ve realized you are on your third or fourth listen. Quite impressive.