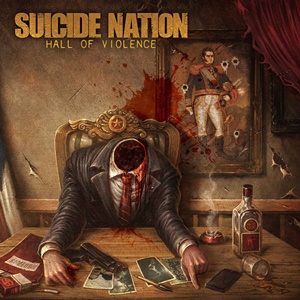 In many South American countries, metal releases take time as resources may be limited, beyond quality time and proper equipment. Suicide Nation have been together since 2006- releasing their first EP Another Way to Die in 2010, followed by a full-length Shoot to Kill in 2012. Performing shows in their native Chile and Argentina over the years, we finally get the follow-up Hall of Violence after an eight-year lapse between recordings. Proudly sticking their flag in the thrash camp, the influences are very apparent on initial listen for these ten tracks – it’s questionable though if the five-piece have done enough on their part to distinguish themselves in the originality or memorability of this output.

The up-tempo, frantic drumming and occasional semi-blasting nature for Matias Gonzalez is as steady as a metronome when “RSS” and “Suicide Pact” roar through your speakers – as vocalist Felix Arto mirrors a mix of Tom Araya’s venomous bite and John Kevill’s wide range of spitfire speed and blood curdling screams. The guitar riffs possess that galloping nature making mandatory headbanging essential when taking in the main hooks for “The Everlasting Hatred” and “Urban Punishment” – although there are sequences where the lead breaks go off the rails in a cacophony of notes meant for sheer excitement over anything aligned to the song (think Slayer again here). It’s evident Suicide Nation have studied at the altar of mid-90’s Swedish thrash/death (The Haunted, At the Gates) and the Bay Area elements that put Testament and Slayer on the map. Gang choruses punctuate specific key phrases, and when the band does slow the proceedings to mid-tempo transitions, you can rest assured there will be walls of death, circle pits, and stage diving/vaulting occurring with regularity. As solid as the mechanics, tones, and production are for Hall of Violence, there’s nothing specifically special to stand out creating something like an “Over the Wall”, “Toxic Trace”, or “Angel of Death” for the group – making the band very interchangeable despite having all the tools to deliver a killer product.

Considering the genre has now been around for over 35+ years, bands like Suicide Nation need to really be at the top of their game dissecting their songwriting to make material that elevates themselves as younger contemporaries fight for limited attention and finances. Hall of Violence may appeal to the average thrash consumer, but probably not move much beyond that fanbase.