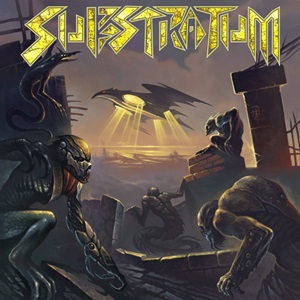 Before grunge infiltrated the mainstream marketplace, Seattle did have a metal scene gaining worldwide attention through major label artists like Sanctuary and Metal Church. Glad to see that newer blood fills the water, as Substratum are a five-piece group from the Northwest intent on putting their own stamp on classic, traditional heavy metal. Together since 2013, they’ve released a limited edition (100 copies folks) demo tape and appear armed and ready to kick ass now and take names later for this self-titled full length.

Brandishing a healthy respect for twin guitar harmonies and superior bass ethics against a focused 80’s-oriented riff template, many faithful worshippers of Judas Priest, Accept, Riot, and their offshoots will headbang incessantly to the pounding axe work, thunderous drumming, and sinister melodies for “Burn the Night” and “By Any Means”. The energy can shift from almost thrash to Rainbow-oriented classic hard rock, as guitarists Jonny Haynes and Max Nazaryan fill the sonic spectrum as complementary players while wielding thoughtful lead breaks that can be exotic, cultural, and heavy all wrapped together. Vocalist Amy Lee Carlson possesses magnificent charisma, a mysterious nature about certain mid-range melodies and confidence to go through multi-octave capacities conjures everything from Leather Leone and Debbie Gunn to current Savage Master singer Stacey Peak when taking in her work through the Mercyful Fate-ish highlight “Pain God”.

Closing the record on “Curse of the Soothsayer” trilogy, it’s an almost twenty-minute adventure that features everything from classical acoustic guitar work and marching Omen strains for “The Beggar’s Toll”, a playful uplifting “The Cycle Begins Again” that could serve as Substratum’s call to arms anthem, all brought to a fitting conclusion through the epic “King in a Grave” – sinister supplementary male narrative work as Amy glides across another fantasy-oriented tale equal to the metal task. Kudos to the raw production nature of Substratum – the snare crackles, the guitars churn, the bass intertwines in a lethal fashion all promoting this material to another level you don’t usually hear out of a band three years young and counting. The only minor misstep to this scribe lies in the computer graphic, sci-fi oriented cover, as it has more of a Euro-power feel than really the band deliver stylistically.

Those collectors of the Metal Massacre series or others in that 80’s US metal frame of mind need Substratum in whatever listening device they crave, and now.