Tuesday, 3rd May 2016 By Katarina McGinn 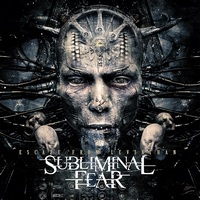 Italian melodic death metal squad Subliminal Fear tend to leave some space between their releases. With previous albums being released in 2007 and 2012, 2016 brings us up to their third full-length album, Escape from Leviathan. But with all this time, they’ve brought some high profile guests to the table as well, in the form of Jon Howard (Threat Signal), Lawrence Mackrory (Darkane), and Guillaume Bideau (Mnemic), just in case you need some convincing.

Those fans who cannot get enough of the more modern side of melodic death metal, complete with industrial and synth additions, should find Escape from Leviathan to be an addictive romp. Some light Fear Factory influences in the riffing style (along with the industrial effects) give it some separation from the In Flames/Soilwork worship that tend to be the norm here, and also provides a more sleek and futuristic approach. The choruses tend to be decidedly catchy, with “Dark Star Renaissance” claiming the title of most likely to bore a hole into your skull. Again, the clean vocals and underlying melodies here tend to have some more metallic muscle beneath them – allowing the memorable moments to be there without losing its edge. Of all the great guest appearances, Howard’s seems to be the strongest, with his trademark cleans and shouts permeating some key moments and giving “Evilution” an added boost. There’s even a rather excellent metallic cover of Talk Talk’s “Living In Another World” that meshes so well you might not even realize it’s a cover.

For the melodic death metal enthusiast, Subliminal Fear deliver all of the goods with Escape from Leviathan. It’s full of hooky riffs and soaring choruses but keeps a harder edge to accompany some electronic and industrial influences, which places it in less of a crowded space than like-minded bands. What’s not to like?