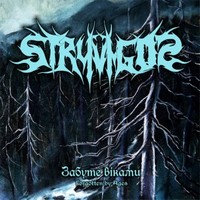 Atmospheric black metal many times can lie in either the more shoegaze camp or in the pagan realm. Of course, this is a generalization and there is much which exist both in between and outside of these loose labels. When speaking about the pagan camp, the general undercurrent, main theme, imagery or vibes given are almost always based around forces of nature and/or pre-Christian traditions. Almost nobody does atmospheric pagan black metal better than the central-to-eastern Europeans (including the Scandinavians and Slavs) and Russians (or those in the old Soviet Bloc).

In the case of newcomers Stryvigor, the homeland in question is Ukraine – a fertile place for metal of this ilk, which also boasts top-tier acts such as Drudkh, Nokturnal Mortum, and Khors. Named for the Stryvihor river, which flows into the Carpathian mountains, Stryvigor brings the magic of these old lands into their music, as is felt “In The Icy Embrace of the North”, the instrumental introductory track of deep atmosphere by way of keyboards, assisted by bird calls and wolf cries.

Second track “Mysteries of Darkness” brings the full-band treatment (a trio, as a lineup) and we hear a band playing very much in the wheelhouse of the aforementioned bands, using blasting drums, screamed vocals, fuzzed basslines and icy melodies plucked out on guitar, carried on currents of well-used synthesizer. If you are a fan of this type of music, Stryvigor won’t bring you anything you haven’t heard before, but for what they do bring, Forgotten by Ages is a well-made work and a welcome addition to the genre. At around 33 minutes run time, the album doesn’t overstay and makes for an evocative listen. Fans of the genre, and especially of Khors, should give this solid debut a listen.