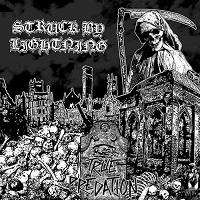 Not having to think while listening to music is sometimes a good thing. Like, there’s enough to think about during the course of a day (when to nap, when to eat, how to avoid hearing Justin Beiber, etc.), so a band like Columbus, OH’s Struck By Lightning comes in handy. On their True Predationsophomore effort, the four-piece take a stripped-down, pissed-off, hopped-up approach to crusty d-beat thrash. There’s no splitting hairs here…or even the use of many brain cells. It’s a tried-and-true bruiser, without anything resembling flash or pizzazz.

Part and parcel with the likes of Trap Them, Disfear, and Tragedy, Struck By Lightning make rather quick work out of fast-paced songs like “Stalk and Prey” and “Funeral,” neither of which fail to make much of a mark. Where the band does make some headway is in the off-kilter “We Are All Just Rotting Corpses,” which combines black metal savvy and with crust-punk aesthetics, while the grinding “Plague Culture” is sure to unfurl many topless (dudes, of course) circle pits.

The album isn’t heads-down all the way, as evidenced by “Mindfucker,” which loosens the flow up with a swinging main riff and tempered pace. “Extinction Event” is a like-minded song, which entails some sludgy, Crowbar-esque riffs and Gregory Lahm’s (ex-Mouth of the Architect) rather aggressive and snarled vocals. Album closer “Harbingers” ends with some manic tom-work from drummer Thomas Ownes, giving the album a proper send-off in true crust-core fashion.

The numbers game alone hurts Struck By Lightning’s chances of reaching the levels of the aforementioned Trap Them and Disfear, yet there’s some burly moments on Predation worth checking out. If nothing else, these lads should feel right home in the confines of a sweaty, damp club, surrounded by sweaty punters with nothing better to do than to rage.