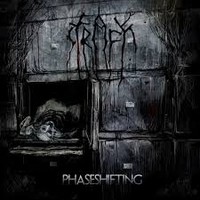 A 2014 release that has re-entered press circulation, Phaseshifting is the product of Strafk, a mysterious Russian duo with the names of Leegheid and Stof. The pair originally got together in 2013, since churning out said four-song EP that oscillates between hard(er) rock, experimental, metal, and lots of other disparate elements. Translation: It’s an avant garde release that’s elusive as it is complicated.

Opener “Phase I – (Void)stare” serves as the EP’s most black metal inspired cut, going from an instant, classic BM rally, to the type of stripped-down rock that modern day Satyricon is so fond of. The shape-shifting doesn’t end there, with “Phase II – Inner Distortion” engaging in the sort of neo-progressive offensive that is suitably delicate, but then (of course) transitions into a harsher mutation of what was found on “Phase I – (Void)stare.” The industrial side of the band is best represented on “Phase III – Death and Decay,” where a nihilistic tone obscures the entire track. EP closer “Phase IV – The New Embodiment” ventures out even further, portraying a total sci-fi feel that is the least metal (and interesting) of the four cuts.

Probably a case of too much experimenting, Strafk’s Phaseshifting lacks a definite vision, not to mention a batch of songs that are able to be easily digested. In a way, this goes to show how far out some bands can go when dealing with the core elements of black metal. In essence, anything goes. That’s not always a good thing, mind you.