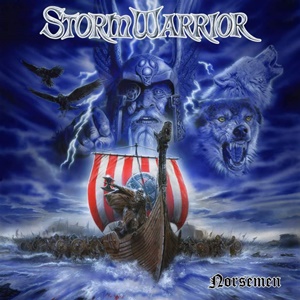 Together since 1998, German act Stormwarrior remain resolute in their power/speed metal platform. Evident through their logo, cover art, and imagery is an affinity for the Teutonic sound – high-pitched vocal melodies, larger than life choir-oriented choruses, bombastic-laden tempos that lead hordes into battle and charging guitars that drive the dragons and warrior-theme lyrical content all home. Original guitarist/vocalist Lars Ramcke remains from those early days, although drummer Falko Reshöft joined before the band’s self-titled debut album in 2002 – the quartet rounded out by bassist Yenz Leonhardt and second guitarist Björn Daigger. Norsemen is the sixth studio record and first in almost six years for the band – but a fervent reminder that those who miss the gallops, twin guitar harmonies, and tough as steel sonic output will rejoice in delightful splendor at this undertaking.

Most ardent followers of power/speed metal, especially if you’ve followed the veteran purveyors like Helloween, Running Wild, Gamma Ray, and Blind Guardian, will see where Stormwarrior is coming from in an instant. Heavy doses of harmony-charged guitars and simple choruses meant for unison audience chanting puts “Odin’s Fire” and “Norsemen (We Are)” near the top of the charts in checking off all the necessary boxes to be future crowd pleasers. Dazzling displays of fiery licks and up-tempo bass heroics galvanize the uplifting spirit of these songs – transitions that bring about that metal unity we all strive for in the genre. The upper register vocal penchant Lars delivers time and again has the energy of Kai Hansen and the resolute passion of Piet Sielck all rolled into one – steady as a rock during “Storm of the North” as well as the second half winner “Blade on Blade” which will bring many back thirty-plus years into an era of musical exhilaration complete with a bass solo during the extended instrumental section. Other expected norms appear throughout this record – a dramatic, seafaring intro for “To the Shores Where I Belong”, the sounds of clashing swords as the Running Wild-like guitar lines burst through “Sword Dane”, and an eleven-minute plus epic closer for “Sword of Valhalla” that Helloween and Iron Maiden maniacs revel in for atmosphere, musicianship twists, and calculated dynamic firepower.

Stormwarrior exudes a love of power/speed metal somewhere far beyond the lands of keys, galaxies, or pirates. Clichés abound and the themes are predictable – but damn is this an entertaining release that makes you sing along, grab whatever instrument you can, and be a part of this unifying movement. 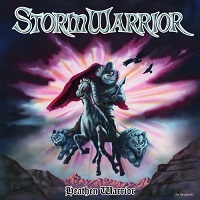