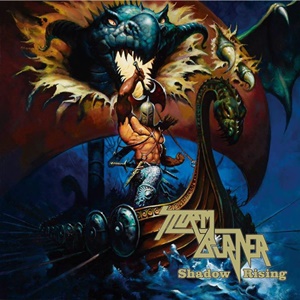 If you’ve been around the scene long enough, familiar names pop up in new places. Swedish metal band Stormburner may be a new outfit releasing their debut full-length for Shadow Rising, but they contain a seasoned singer in Mike Stark, who used to front Starblind for two albums, and also played drums from 2002-2005 for Steel Attack. This newer quintet delivers an addictive and potent brand of heavy metal through these ten tracks, wasting new time delivering powerful riffs and upper echelon melodies/ hooks in an anthem-oriented format that rivals many of the legendary bands in this genre.

Right away on initial impact the obvious soaring range of Stark when it comes to his phrasing, inflection, and emphasis on upper tier screams and powerful falsetto notes puts him in the class of a Halford, Dickinson, and Daniel Heiman during the man’s Lost Horizon period. The traditional riffs and mid-tempo to slightly faster arrangements open up possibilities for stunning moments – check out his work in “Metal in the Night” and the twin guitar harmony-fueled “Men At Arms” for two sterling examples of his magnificent range and ability to raise goosebumps on every body part possible. The musical foundation intertwines a pure heavy metal and 80’s power aspect, bringing to mind everything from Accept and Manowar, unison choruses with gang background supplementation assuring material like “We Burn” and the Hammerfall-esque “Into the Storm” has no trouble translating easily on stage as it commands attention through these studio versions. Lead guitarist Mats Hedström spits out those hero-type breaks, lacing his notes with fiery speed runs and circular patterns that stick with you just like the massive hooks on display – check out “Shadow Rising” and the already mentioned “Into the Storm” for samples of his axe mastery. It’s also great to hear the band take on a bit of an epic flavor for “Rune of the Dead”, many of the rhythms traversing a “Heaven and Hell”-like atmosphere while the theatrical-oriented background vocals aid the dynamics and keep the listener banging away to the steel-like presence and cultural-oriented time changes.

The Ken Kelly-driven artwork and imagery/band logo all combine to give Stormburner an impressive first foray with Shadow Rising. Especially considering the need for younger bands to deliver quality studio records that all generations can treasure once the old guard retire (or die), this is a mighty effort to project the strength and power of heavy metal.