Storm upon the Masses – The Ones Who Came Back (Dolorem Records) 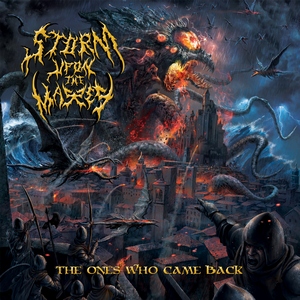 When it comes to death metal, it’s hard to argue about a band that just wants to go for the gusto. The type that spins up a whirlwind of chaos and musical destruction as soon as they pick up their instruments. It’s a technique that works effectively through the years for acts like Krisiun, Hate Eternal, and Hour of Penance. Storm upon the Masses are a new act set on carrying the torch in this particular field.

Having only one previous EP under their belt, The Ones Who Came Back feels precise and ruthless in its execution. Some may be quite familiar with the drill – Storm upon the Masses waste no time in ramping their speed through the roof in a maelstrom of frantic riffs and blastbeats, yet it’s no less powerful in knocking you backwards. It’s relentless brutality with no expense spared. Despite the near-incessant speed rush, they do understand that an occasional slowdown can work wonders. In fact, it is the reason that will make you want to return to the album outside of the sheer frenetic energy. Within the tracks usually comes a few moments of catchy grooves, which tend to be intensified due to their placement. A track like “Savorless Sadistic Ritual” moves between blastbeat-driven fury and punishing grooves in a way that builds up and delivers with brutal execution.

The formula is tried and true, but it never diminishes its impact over the course of The Ones Who Came Back. This is hyperspeed death metal done the way that’s it’s meant to be – full-on carnage with just enough melody to bring you back for another helping.