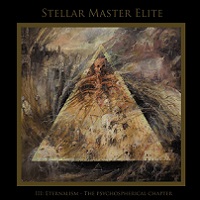 Remember Thorns? The much-lauded project of long-time Norwegian black metal figure Snorre Ruch? This particular batch of Germans do, having named their band after a song off of Thorns’ utterly magnificent self-titled album from 2001. Ruch hasn’t bothered to follow-up the album (there was once rumors he was experimenting with hip-hop and black metal at the same time. Yikes!), therefore Thorns’ legacy should be pretty safe and sound. Stellar Master Elite, not surprisingly, follow along the same obtuse, demented black metal path, as found on their third jaunt, III: Eternalism – The Psychospherical Chapter.

Dead-ahead black metal this is not. Stellar Master Elite’s MO appears to be hinging upon how wide and rangy their riffs can be, as well as the rich blending of industrial and avant-garde elements. It’s very much in the “anti-melody” field, which is fine. There just has to be something to work with. Instead, a good chunk of the songs on III: Eternalism – The Psychospherical Chapter lack any sort of gut-hitting punches. Songs like “Buried in Oblivion” and “The First Principle” may hum with a Satyricon-like dissonance and angularity, yet they’re usually offset by the album’s more adventurous, less-fulfilling numbers ala “Transmission: Disruption” and the 14-minute “Eternalism.”

Chiefly, there’s a bit too much padding on the “out-there” BM back-end for Stellar Master Elite to have proper take-off with III: Eternalism – The Psychospherical Chapter. The forays into Satyr-ville might actually be the album’s best, while the tracks showcasing SME’s given purpose tend to fall by the wayside in a haze of far-reaching (and far gone) ideas. But point being, avant-garde black metal tends to be a fickle beast. No doubt the gents in Stellar Master Elite are experiencing it.