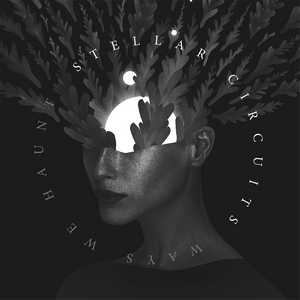 Sometimes it’s all about the ebb and flow of an album. It can sink beneath your skin, or it can allow you to drift away in the emotions of the moment. While Stellar Circuits may be a fairly new name, starting only in 2015, it’s quite clear that they have a way with capturing the sentiment and feel of a song. There’s a sense to Ways We Haunt that lures you in, lulls you into a sense of safety, and cranks the intensity up to make sure you are paying attention to each note.

While the comparison may off-put some, Stellar Circuits has a bit of a Tool vibe if they went in a more heavy metal/progressive metal direction. The vocals have an ethereal feel to them, rummaging through emotive landscapes of pain and sorrow while avoiding sounding forced or clichéd. Instead the riffing and vocals come together to create an almost soothing feeling at times – just enough heaviness to get the gears moving but done in such a way that it feels floaty and airy in the right ways. Opener “Nocturnal Visitor” starts off in this exact manner, with some catchy grooves that will get you moving but still impact on a deeper, emotive level. Then the escalation begins, ending with some heavier moments complete with shouted vocals and a more abrasive atmosphere. It’s a formula the band exploits over the course of the album. It’s not something that becomes predictable, instead it keeps you on your toes. While it’s never out of left field, many tracks like to engage into more explosive territory, or even just jump right into it, like “Rorschach Master.”

For progressive material, they don’t lay into it to the extent that it becomes a distraction, offering a more emotional experience that likeminded bands don’t always tap into. With that idea, Stellar Circuits provide a powerful listen, one in which the heaviness and atmosphere play an equal role in telling a story that genre fans won’t want to end.