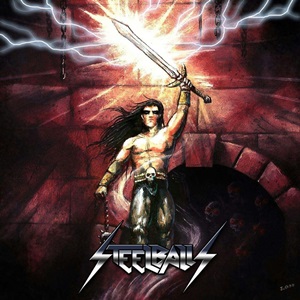 Deep in South America power hearts run free. You can thank Iron Maiden and it’s offspring for this appeal since the 1980’s, as Steelballs are an Argentinian quintet prime and ready to deliver a thunderous brand of uplifting power/speed metal that rouses rebels to scream and shout along courtesy of this debut, self-titled EP. Forming in 2013, a few lineup shuffles took place while personal projects took precedence – finally getting down to business over the past year to record this four song outing of vintage sounding material that the band self-proclaim as ‘returning to the roots without stagnating in time!’.

An interesting drinking game could take place alone if you had to inhale a favorite shot every time the words ‘metal’, ‘steel’ and ‘fire’ come forth during the three original songs “Steelballs”, “Farewell”, and “Inquisitor of Faith”. The axe team of Lucas Galarza and Juan Manuel Herrera pull out all the stops in terms of heads down rhythms and strong, melodic hooks that often receive the twin harmonic treatment – their best work appearing on “Inquisitor of Faith” which brings to mind prime time Running Wild meets mid-80’s Riot, although the simplified chorus (‘Kill…Kill!….Fight… Fight!’) sure has a Manowar air about things. The direct songwriting doesn’t float into any extraneous intros or prolonged, shred instrumental sections – none of the four cuts tips the four-minute barometer scale.

Helloween as an influence penetrates the up and down riffs and rapid fire, high pitch vocal work for the title cut – outside of the fact that the band chooses to end the record with “Starlight”, the opening track from the band’s 1985 EP. As great as the instrumentation is and the obvious professional abilities of the musicians, at times the thin production values (clickety-clack kick drums the biggest victim for sonic appeal) and the occasionally warble delivery from vocalist Juan Pablo Churruarin may turn away some people who want a more Dickinson-esque presence soaring over the top.

Steelballs leaves no mystery as to their calling – speed metal courses through their veins, and at 15 minutes puts all their Teutonic-favored fury on the table. Potentially one to watch as they gain more seasoning.