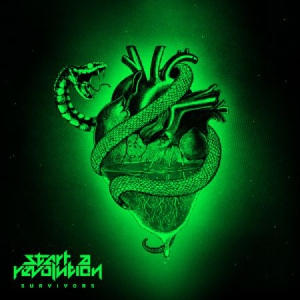 Interestingly enough, one of the first things you’ll find on Start a Revolution’s resume is a metal cover of “Gangnam Style” from a few years back. Making a jump from that track directly into the sound of their second release Survivors, is one that shows the band capable of making some real growth. While their sound does seem to want to veer off into a few different directions, there are some clear strengths to this upcoming act.

The one thing that can be quickly pointed out is that Start a Revolution has a modern metal sound. There’s some grooves, catchy solos, emboldened choruses, and a crisp production to really bring the whole package together. But it’s what the band does from track to track that makes it a bit trickier to nail down. The album starts off with the punchy “Hellcome,” which delivers some heavier grooves and more gruff vocals alongside a more melodic chorus complete with some strong hooks. Later on, “Sit & Wait,” “Values,” and “Anthem of Today” do a commendable job of coupling metalcore-esque riffing and twisting it into something with modern appeal. On the melodic end, songs like the rousing closer “Unity Hymn” and “Anchor” use driving choruses guaranteed to stick in your head for a while. Where things take a dip seems to be when they swing too far on the modern side, such as “Broadcaster” or the title track. A heavier reliance on rock structures shifts the music in such a way that it sometimes feels like the band is jumping between two different sides of the rock/metal divide.

Start a Revolution have a fresh take on modern metal with Survivors. Some of the shifts may seem a bit contrasting, but it’s something with potential as the band continues to smooth out the edges. If you are okay with something occasionally sneaking outside of the usual metal boundaries, it’s worth a listen.