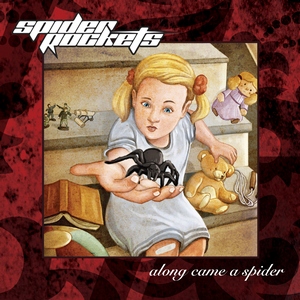 With twenty years and four previous albums under their belts, New Jersey’s Spider Rockets are far from a new act. In fact, their approach to rebellion and rock ‘n roll is one that’s firmly rooted in the past. But it hasn’t kept them stuck there, with their fifth album Along Came a Spider being a showcase for an amalgamation of classic rock and hard rock (with some occasional punk attitude) that can just as easily stand with more modern giants.

While it could be argued that Spider Rockets’ approach is more of a straight-forward one, it’s also all about jam-packing as many catchy guitar melodies and solos, ear-burrowing hooks, and enjoyable choruses into each track. From the more bluesy and fuzzy guitar lines of the opener “Rip Your Heart Out” to spunky licks with plenty of attitude on “Drama Gore,” there’s a lot of energy that instantly grabs your attention. The short but sweet cuts do seem to maximize what happens in the song length (generally about 3-ish minutes each), and the band seems highly attuned to keeping each track thrusting forward towards its goal. The utterly catchy “Love it When You’re Wrong” not only has a massive chorus but they manage to include an effective guitar lead and equally gripping main riff. Helena Cos’ vocals are quite dynamic and absorbing, just what a band like this needs, with the final one-two punch of “Losing It” and “Sick” being great examples of what she can accomplish at both the more melodic and rockin’ ends.

The bottom line on Along Came a Spider is that it personifies fun and engaging rock ‘n roll at its finest. They can channel the olden days (such as the enjoyable and fitting cover of Pat Benetar’s “Heartbreaker”) but can include a more modern and contemporary vibe to stay relevant. And with a compact timeframe that never slows down, it’s a suitable ‘crank it with the windows down on repeat’ type release.