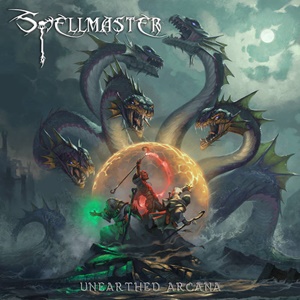 Mystery and fantasy collide for this unknown trio of musicians coming together as Spellmaster. Inspiration coming from the original role-playing game Dungeons & Dragons, Gwydion the Bearded, Molasar of Morgutar and oOdo the Unwyse take the listener through Unearthed Arcana, their debut full-length consisting of eight heavy metal tracks conjuring up sights, sounds, and lyrical content from the 1980’s. Imagine rolling the twenty-sided dice and racking up hit/experience points on adventures and campaigns that take you away from school, work, and reality as these songs roll through your speakers (or preferred listening method, headphones /earbuds work too).

What’s immediately noticeable are the layers of guitars, keyboards, and drum tones that contain a lot of the old school trademarks – aligning with the overall traditional, power riffing and melodic nature of the songs. Slight neoclassical guitar runs sit side by side with driving mid-tempo chords and engaging, multi-octave vocal melodies for “Cause Light Wounds” – the mid-section featuring dark synth and choir textures. The lead vocals often mesmerize – possessing that epic, fire on the mountain spirit, channeling angles of Jon Oliva, Lizzy Borden, and a bit of Peter Steele come in through the doomier opener “Death Spell” or the Dio-era Black Sabbath-oriented “Cone of Cold”. At the same time, a lot of the musical feel has a lot of the older US power/heavy metal atmosphere – brooding riffs that build with tasteful lead mechanics and solid, driving tempos, a la Savatage/Metal Church especially during personal favorite “Dimension Door”. Most of the songs are very basic and compact, but the seven-minute plus closer “Stinking Cloud” features extended keyboard ambiance that shifts into another Solitude Aeturnus-like main riff, the twin guitar harmonies and vocal components keeping engagement on high while the fade out/fade in ending makes you feel you are at the end of a triumphant campaign.

Another Massachusetts band to keep an eye on, Spellmaster hopefully will not be a mere one-off record as Unearthed Arcana should gain decent buzz especially with those forty-something and above. Let your imagination whisk you away, press play, and conjure up your favorite spells to this.