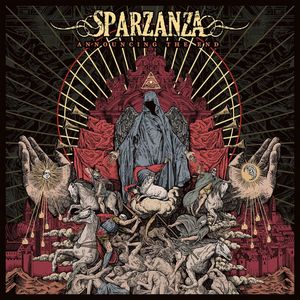 One of those hard rock/metal hybrids that one can’t really view the line between, Sweden’s Sparzanza have a sound that’s both modern and classic all at once. When listening to their eighth release, Announcing the End, it’s a blur even as you move from track to track. But don’t think that tosses it aside as a scatterbrained release – you’ll be too busy removing the sheer number of hooks from your head to be worried about silly classification schemes.

Massive grooves and thundering riffs bring the opening title track to some fantastic heights, setting the stage for the album to come. Some shouted vocals and a huge, soaring chorus (Fredrik Weileby’s vocals truly shine) are enough to make you take notice if the riffage doesn’t. Catchy, fuzzy riffs continue along into “Damnation,” where a pleasant melodic solo also takes centerstage – easy to see this band being able to grab fans of both stoner doom as well as modern metal fans with their approach. Other songs like “Vindication” and “We Are Forever” really plow forward with energy – the combo of rock attitude and metallic crunch really providing an excellent 1-2 punch. A few cuts seem to swerve into more rock (“Whatever Come May Be”) or ‘core-ridden territory (“The Dark Appeal”), and don’t seem to possess the same level of pizzazz found elsewhere on the album. The slight inconsistencies may not damage the overall appeal, but it’s the one flaw that seems to hold things back from reaching the next level.

Taken as a whole, Announcing the End is a collection of tracks that possess a pure metallic underside while injecting some equally genuine rock catchiness and sensibility. While a few of the tracks bring the formula a little too far in one direction or another, there’s no denying that it’s a formula that can work wonders. When they nail it (any of the tracks cited above), it’s some simply wondrous material.