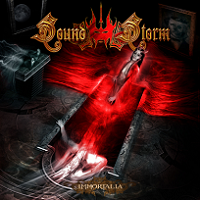 Sound Storm have come a long ways from the days when they gigged in the northwest of Italy playing covers of Iron Maiden, Manowar, Metallica and Savatage. At least during those formative years, they honed their craft and brought in influences from symphonic, epic metal, power metal, classical and celtic folk music to really bring them to forefront of the genre.

At times I find them comparable to Blind Guardian, although probably not as grandiose or as progressive as the aforementioned band from Germany. I will go out on a limb and say they manage to seamlessly blend all these influences with great satisfaction and as a pleasant result; their second full length is born chock full of those said influences. They’ve christened this release Imortaliaand it may come across as a bit lofty for an album title, but upon listening to all 12 tracks, I feel the title is an appropriate one.

What you get with this release is 58 minutes of sweeping music with majestic sounds interwoven into all the songs. There are tons of minor beats, time changes and little inflections to dazzle the listener, but that is just for starters. The riffing is masterful and on songs like “Wrath of the Storm” and “Call me the Devil,” the rapid fire approach is overpowering to the ears. It’s in a good way though, as the broad strokes help to create a soundscape of melody upon melody. I think it’s a bit extreme in spots, but it certainly will help to be a breath taking experience for the listener.

I know symphonic/power metal can be a little stale at times, what with the glut of bands existing already in the genre, but Sound Storm season this release with a dash of theatrical brilliance that is personalized by individual band members. For example, guitarist Valerio Sbriglione invokes the power of Hades with his inspired playing and that is coupled with Phillippe D’Orange’s relentless vocals that splinter into a range of profound to chaotic singing. It’s becomes a bit extreme at certain intervals, but I liken this approach to that of beauty and the beast. In other words there is something for everyone on this release.

Ultimately, Imortalia may become one of the standout releases for 2012 and as a sophomore release this is a step-up from their debut. I would hope this is just a stepping stone to bigger and better things and I pray future efforts continue to steal my breath away. In the meantime though, enjoy the brilliance that is Imortalia and revel in their symphonic glory.