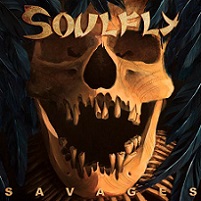 With the release of Soulfly’s ninth studio album, most fans will have a pretty good idea of what to expect. Max Cavalera’s perennially barbaric vocals and straightforward but eminently infectious riffing style re-emerge in full force, attacking with all the savagery (pun intended) that has defined his career since the mid-’80s. What listeners might not expect, however, is how frequently this latest offering harkens back to the earliest entries in the Soulfly catalog, seemingly pulling much more inspiration from ground already trod on the more groove-oriented Primitive and self-titled album than anywhere else. (Most of the riffs in “Spiral,” for example, could have appeared in the middle of the eponymous debut and no one would have batted an eye.)

This isn’t to say that some of the band’s newly developed tricks have been abandoned. The thrash and death metal elements that took full effect on Conquer and Enslaved are evident in the pummeling “Cannibal Holocaust,” a track whose adrenaline-fueled delivery is even reminiscent of some Cavalera Conspiracy material, as well as standout track “Fallen,” whose stylistics owe much to more modern death metal acts. However, much of the album relies on Cavalera’s trademark simple-but-effective groove riffing, which, though it’s always been a staple of the band’s sound, is used with more frequency than on more recent efforts.

Soulfly newcomers, drummer Zyon Cavalera and bassist Tony Campos, perform capably in the rhythm department, adding no-frills intensity to the already pulverizing mid-tempo heaviness of tracks like “Bloodshed” and “K.C.S.” Marc Rizzo, never one to disappoint, shines again as his extraterrestrial-sounding leads on tracks like the aforementioned “Spiral” and “Ayatollah of Rock ‘N’ Rolla” rank among his most unique contributions yet.

Savages is a solid entry into the Soulfly catalogue, and even though the overall stylistic approach is a bit of a reversion this time around, the record avoids the trap of sounding stale or rehashed. But what the album lacks in breaking new ground, it makes up for with unrelenting power and a fair share of memorable moments, delivered in the way that only Max and company can.