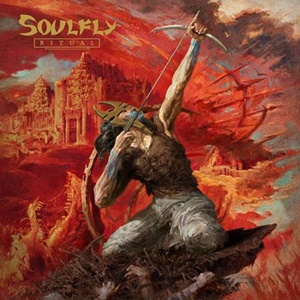 Ubiquitous in unleashing new material consistently from any number of bands/projects, Soulfly has been Max Cavalera’s main creative outlet since leaving Sepultura in 1996. Ritual is the 11th studio album in twenty plus years for the band – a testament to channeling that creative fuel and continuously delivering his ideas and vision to the world. Going where his head and heart take him – along with a set of musicians that can execute on all fronts – these ten tracks possess a bit of a throwback element to the early roots of Soulfly in the tribal/groove metal sense, while also reminding long-timers that Max has that thrash/extreme streak that comes into focus many times on this record.

Producer Josh Silver went back to a lot of the mechanized tightness that made Chaos A.D. a pinnacle game changer during the 90’s Sepultura days – and you can tell even as the band spits out raging efforts like “The Summoning” and the Motörhead-style anthem “Feedback!” it’s still got that fist in face affect as the sonic output levels you. As a rhythm section, bassist Mike Leon and drummer Zyon Cavalera inject proper breakdowns in key situations without allowing that groove to subside – accenting the key riff and guitar harmony sequences Marc Rizzo and Max push through “Bite the Bullet” to make it a second half Ritual standout. Guests like Randy Blythe (Lamb of God) on “Dead Behind the Eyes” and Ross Dolan (Immolation) for “Under Rapture” allow Soulfly the chance to enhance their sound into those outside nuances, incorporating pummeling doom/death for the latter and visceral modern thrash potency for the former. Stunning classically framed acoustic guitars open the otherwise groove heavy stomper “Demonized” – whispered vocals giving way to death tremolos and Max’s massive roar as ‘red…. skies!’ reverberates to the clouds. Continuing in the tradition of ending a record in calmer, left field fashion – “Soulfly XI” contains a saxophone solo and no natural drums, allowing the serene arrangement to unfold in a light Latin/jazz mashup.

Ritual gets back to the early self-titled Soulfly album in terms of songwriting and performances, but also injects a bit of Max’s love for thrash, punk, and extreme metal into the mix. And that’s all anyone into the band could ask for.