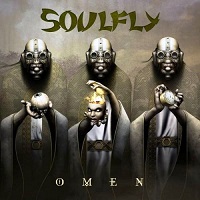 There was a time when no self-respecting metal fan would touch Soulfly with a 10-foot pole. Being how duped a lot of us were with 1998’s self-titled debut (the Fred Durst guest spot is still unforgivable), Max and co. rubbed salt in the wound by staying nu metal until 2004’s solid Dark Ages. From there, Cavalera has been gradually getting back to what he does best and if 2008’s Conquer was any indication of where Soulfly was headed, Omen is the end result.

Considering this is Soulfly’s seventh studio album, Omen has the grit and tenacity that should have been from their onset. The riffs are seismic (cue up “Bloodbath and Beyond” or “Great Depression”) and Max chose some helpful guests in the form of Dillinger Escape Plan’s Greg Puciato on “Rise of the Fallen” and Prong mainman Tommy Victor for album highlight “Lethal Injection.” Again, this sure beats having the parade of nu metal clowns around.

Unpredictability was never Soulfly’s long suit and as usual, you can tell the name of the song

as soon as Max shouts it a good three of four times during the chorus (“Jeffrey Dahmer,” “Vulture Culture”). Lead guitarist Mark Rizzo continues to prove his worth, adding a unique flavor to the proceedings, closing with “Soulfly VII,” a free-flowing, flamenco-like jam that ends things on an emotional high.

It’s refreshing to see Cavalera find his plot, his mojo, and his Chaos A.D. riffs. Had Omen been released 10 years ago, Sepultura would be dead and buried, but two bands

at the expense of one great band is the situation we find ourselves in. This scribe has always been on the Sepultura side (A-Lex is good – promise!), however, Omen proves to be a decisive, persuasive and ultimately satisfying album. Biotech is still Godzilla, though.