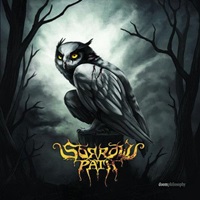 Taking a 7 year break between 1998 and 2005 wasn’t in the original game plan for Greek doom metal band Sorrows Path. It is one thing to tackle the mandatory military service issue, but quite another to face co-founder Kostas Salomidis’ horrible motorcycle accident which almost paralyzed him, necessitating 5 years of rehabilitation. Those into doom music though turn tragedy into triumph, and now we witness a second studio album in Doom Philosophy.

Do not fear any stoner, drone, or funeral oriented elements to enter the Sorrows Path platform; this is pure, classically charged doom with occasional power flares. Imagine the healthy mixing of Candlemass, Memento Mori, and Solitude Aeturnus in terms of minor riffs, devil’s triad trail offs, and slower, clean dynamics for that added tension grab. Kostas and fellow guitarist Giannis Tziligkakis fire off some exciting breaks amidst all the darkness and despair, even giving Edgar Rivera (Solitude Aeturnus) and Snowy Shaw (King Diamond) a nice guest spot on “Everything Can Change” while grabbing some progressive parts and flamenco guitar spirit during the 6:56 oddly oriented instrumental “Damned (O)fish- L.S.D.”.

About half way through the album during the slower to mid-tempo epic “The King with a Crown of Thorns” the limitations of appeal hang on the accented vocalist Angelos Ioannidis. If you struggle with pronunciation of certain English words, that can be forgiven. If you decide to go up and down in a theatrical fashion but can’t convincingly keep the melodies in key that is a faux pas rarely given a second chance. Which is a shame, because the semi-militant musical gallop for “The Venus and the Moon” as well as very straight forward heavy hitting “Tragedy” are quite engaging, beyond Angelos off kilter Halford-like delivery.

Drummer Fotis Mountouris has a great sense of timing and knowledge for executing the double bass and occasional speedier transition brilliantly; check out his best hand to feet coordination on “Brother of Life” and sinister, Candlemass-ish “Darkness” (love the lower background vocal harmonies and equally chilling main riff that sharply sinks in). In the end, Doom Philosophy provides close to an hour of classically charged metal in a mold rarely explored today, so we shall see if the vocals will be a deal breaker or a non-issue over time.

Excuse me, Nightfall and Ancient Dreams beckon to be played…