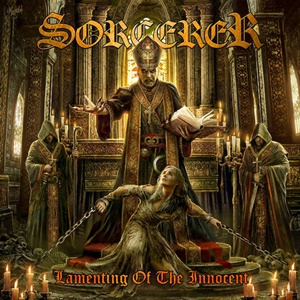 Supreme heavy metal records take an equal amount of right place, right timing, and the right circumstances to all come together. For Swedish epic doom metal act Sorcerer, their early demos of the 80’s and 90’s didn’t necessarily catch enough attention to warrant a record deal – leading bassist Johnny Hagel to join Tiamat and the band to go their separate ways. Since pulling off reunion shows though in 2010 and beyond, they’ve signed with Metal Blade and released two critically acclaimed albums, setting the stage for Lamenting of the Innocent. Aware of the pressure to deliver even more impressive songwriting than ever before, the quintet channel all their seasoning and expertise into a nine song (plus intro) effort that could be a blueprint for future generations to study, dissect, and treasure.

It begins with the ultimate riff – setting the table to build out and upon, the musicians keen on driving that main course home and intertwining the proper support through subsequent parts, hooks, and potent performances. Guitarists Kristian Niemann and Peter Hallgren drive home rhythms and skilled lead play that features neoclassical meets epic heavy/doom metal textures – you’d be hard pressed not to succumb to the aural crushing that the almost nine-minute title track delivers, including a first for the group with semi-growls against the normal clean, majestic melodies of singer Anders Engberg. The lyrical content of witch burning stories matches the despair, the darkness, and the trials and tribulations faced throughout history – even at slower tempos Sorcerer aware of picking up the pace in spots while keeping the main crux of the music streamlined and simplified as “Institoris” and first single “The Hammer of Witches” deliver in spades key segments that make mandatory headbanging or fist waving develop. For the ballad “Deliverance”, Candlemass vocalist Johan Längquist showcases more of his reflective lower register during the verses, twin guitar harmonies against an acoustic layering, presenting an almost weeping nature to the proceedings as cello parts from Svante Henryson add additional somber atmosphere to the proceedings.

You never feel like many of the songs span the eight-minute plus mark. The back half of the album ending in fact on two epics with “Dance With the Devil” and “Path to Perdition” that are titanic and monumental in stature – including everything from big vocal harmonies, spirited and fluid lead breaks, and purpose, just as the best in this genre from Black Sabbath to Candlemass and Solitude Aeturnus have always been able to achieve when they are in their prime state. The combination of impressive musicianship, ideal pacing, proper ebbs and flows for the main song structures, and one of the best vocalists to bring home all the melodies in Anders Engberg and you’ll easily understand why Sorcerer are making their presence felt beyond cult fandom into one of the best acts in heavy metal going today.

As great as The Crowning of the Fire King was in 2017 for this scribe, Lamenting of the Innocent brings things ten steps further in terms of memorable, emotionally moving material that connects on a deeper, profound level through each successive pass. Thank you, Sorcerer – the fans appreciate this second opportunity for delivering stellar records as much as you as musicians probably do.