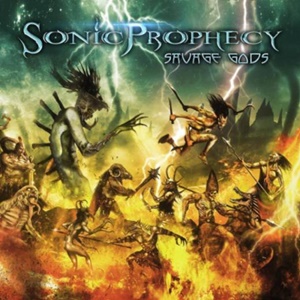 People may forget that although the power metal genre possesses European roots and immense popularity there and abroad, that America has had its own power take through the 1980’s on up. Jag Panzer, Liege Lord, and Vicious Rumors kept the flame burning domestically – helping to spawn that next generation of which Utah’s Sonic Prophecy is a part of. Active since 2008 and releasing a series of singles, EP’s and two full-lengths, Savage Gods as the third album sees the quintet stride confidently into a classic, traditional outlook, full of brimstone riffing, epic instrumental sequences with dynamics, and melodic hooks within the choruses that should be comfortable for all generations to savor.

There’s a tougher sheen to the driving double bass and pulsating guitar rhythms that makes Sonic Prophecy heavier than most, even when vocalist Shane Provstgaard is hitting those Halford-esque, bird call high notes during “Night Terror”. As guitarists Darrin Goodman and Sebastian Martin appear fluid in their tandem rhythms, filling the space with stirring, cultural riffs for spots of “Unholy Blood” while ripping things up in a speedy, Keepers-Helloween style manner for “Iron Clad Heart”, the vocals championing more of that battle charge affect. Diversity is key to gaining acclaim for a power metal record – sometimes going through a semi-doom meets mid-tempo Sanctuary / “Battle Angels” stance with bassist Ron Zemanek gaining a proper tone boost during “Man the Guns”- the lead break taking on some exotic flavor beyond the normal shredding elements.

Shane as a singer ticks off all the proper boxes you would want in a power metal singer. He has clarity, versatility, personality, and can shift from a more emotionally poignant delivery during “Walk Through the Fire” to a sinister, low-edge chilling nature for the verses before rising to the heavens during “Man and Machine”. He will certainly draw comparisons to Halford, the recently deceased Warrel Dane, and others in that multi-octave, high octane caliber. If there is one slight qualm about the almost hour-long outing, it’s the occasional repetitive nature of certain choruses that drag on a bit too long for this scribe’s liking. Trimming that excess could make some of these six-minute on average tracks slightly tidier and tighter in the long run.

Overall Savage Gods puts Sonic Prophecy in rarefied territory these days – a band that takes the 1980’s/early 90’s US power metal sound to a fresh audience of today, executing this material more than respectfully. 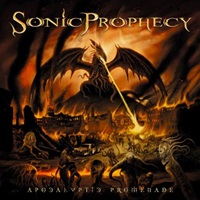