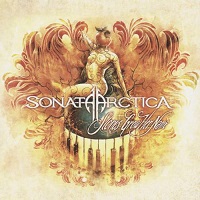 Well into the part of their career where their output is nowhere near as critical as it once was, Finnish power metal heroes Sonata Arctica continue to drift further away from their core, early sound on Stones Grow Her Name. What this means is that essentially, their “new” sound (read: mid-tempo…everything) will be their bread and butter going forward until they hit a creative nadir and go back to typewriter drums. Not going to pull punches – Blistering misses those type of songs from SA, but what’s on Stones Grow Her Name will suffice.

Following suit from 2007’s Unia and its 2009 predecessor The Days of Grey, what Stones Grow Her Name lacks in speed, more than makes up for in muscular tracks that are long on sturdy riffs and Tony Kakko’s ever versatile vocals. There’s no better proof of this on “Shitload of Money” and “Somewhere Close to You,” which might be the heaviest song in the SA annals. “Shitload of Money” (great title, silly subject matter about prostitution, though) works because of its fun chorus, sure to prompt global crowds to join in a sing-along. It’s fun to shout “Shitload of Money!”

There’s some missteps here, specifically the syrupy “I Have A Right,” which is almost embarrassingly whiny. The hokey “Cinderblox” is a faux attempt at a backwoods Finnish metal song, complete with an up-tempo cadence that upon further inspection is the fastest moment on the album, oddly enough. The ballad portion makes up for these songs, with the brooding “Alone In Heaven” and album closer “Don’t Be Mean” (really?) managing to pull at heartstrings with Kakko’s flavorful vocals.

Able to make the transition that Stratovarius were either unable or unwilling to make, Sonata Arctica has left the pure bred-speed days behind. The fact that the songs on Stones Grow Her Name are as grounded as they are in Midtempoville is an indicator of how good of a songwriter Kakko has become. And you know, “Victoria’s Secret” and “Blank File” will always be around for a tug anyway, so let’s cut Sonata Arctica some slack for not repeating themselves.