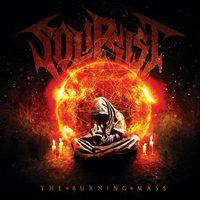 Ever stumble upon a band and get immediately pulled in by it? Such was the case for Solipsist a few years back when The Human Equation was discovered. An incredible sense of balance between groove, thrash, and death metal for an unsigned act at the time, Solipsist’s modern metal act had a distinctive wow factor. Since then, they’ve released a few smaller releases (EP, single) but there hadn’t been a true follow-up to The Human Equation until now.

The Burning Mass continues the progression of Solipsist that has been occurring since The Human Equation. The band has moved further away from the simple Lamb of God or Chimaira comparisons and further honed the aspects that make them tick. At one end, Solipsist’s strong point has always been incredibly intense and visceral riffing coupled with the throaty roars of Noah Buchanan. Those looking for that particular angle of the band will be pleased with tracks like “Butcher,” “Moment of Impact,” and “End this Day.” But there has been a conscious effort to bring more melodies to songs like the standout “Monolith,” which carries a feeling of melodic death metal with some of its soaring leads and harmonies. These moments give some stark contrast to the pummeling riffs that have only grown more deadly with time.

Another element that crept further into Solipsist over time is that of more clean vocals and melancholy, which are effectively brought to the frontline in a few songs of The Burning Mass. “Getting Out Alive” and “The Sentencing” providing more of an emotional kick than before and give the band some more diversity in their offerings. They even work in the more aggressive tracks, such as “None Dare Call It Conspiracy” without watering them down.

After a lengthy wait, Solipsist prove they’ve gone the distance with The Burning Mass. Hopefully with a label backing, the band can get some much deserved exposure as well as hit up more than regional shows. Fans of some groovy, modern death metal can’t go wrong with this one.