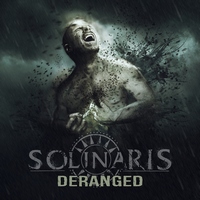 Avant-garde gets tossed around quite frequently with bands that play outside of the box. In the case of Quebec’s Solinaris, it’s an apt assessment. For describing the band as merely technical or progressive death metal doesn’t start to encompass the wide variety of sounds that fill the landscape of the band’s debut album, Deranged. This is some ‘out there’ stuff in the best way possible.

While the overall approach of Solinaris is definitely that of death metal, there’s not a lot of death metal bands that can say that they employ a saxophone player. The saxophone doesn’t add gimmick either; the sax on “Torture Chronicles,” accompanied by some clean vocals, give you a good idea about how far out there the band is willing to go. There are also a great deal of striking acoustic moments as well, with “Field of Trees” standing out as one of the best – this one never even reaches into the band’s bag of distorted guitars or growled vocals. But when it comes time to bring the heavy, Solinaris take out the big guns. Pummeling and tech-friendly riff-fests fill the back-end of the album, with “November,” “Phobopath,” and “Red Rain” giving off a feeling of early Gorguts. Also intriguing is the use of bass, which has a jazzier feel to it, and frequently goes off on its own unique direction from merely following the guitars. The combination of all of these elements ensures that you are at full-attention from beginning to end on Deranged, as well as bringing the band into their own little niche sound.

A concept album about going through the mind of a serial killer in his last moments of life, there’s something twisted yet fascinating about Deranged. For their first album, they show that they are unafraid to go full-force into uncharted territory yet still retain familiar elements that tech/progressive death metal fans will enjoy. There’s much potential as Solinaris continues to further refine their sound.