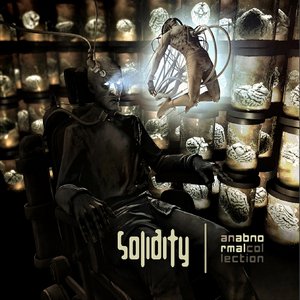 What does constitute an abnormal collection nowadays? Thinking of the title in terms of what Hungary’s Solidity have accomplished wouldn’t be abnormal such as eclectic, with a broad stroke of influences and sounds over the course of the album. Solidity taps their toes (and their instruments) into a little bit of everything, making a collection of songs that still hold together pretty strongly.

Think of the major “genres” of heavy metal – thrash, power, progressive, death – just about the only thing Solidity sticks away from is that of black metal. The album is an amalgamation of the rest in various degrees. There’s even an electronic element that persists as well from the start (“The Collection”), which seeps the band in a more modern direction. Speaking of “The Collection,” you’ll hear the beginning electronically-enhanced opening quickly morph into that of some brutal death metal (particularly vocally with some stunning growls), and then toss in some thrashy gallops and progressive noodling. Add some light groove and you’ve got a good impression of just the first song alone. To the band’s credit, it never comes across as disjointed nor overwhelming, and the remainder of the tracks use the same formula with varying degrees of tweaking, to give each song more of its own identity. There’s the thrash-intensive riffing of “Abnormal Syndrome” that swerves into a more melodic chorus, soaring melodies of “Mercy Denied Forever” that change hands with some solid shredding, and brutal grooves and catchy chorus of “Clockwork” that give a further exploration of the band’s ability to change on the fly.

Even if some of the changes may come out of left field, Solidity are full of potential and show a writing style that refuses to play by the rulebook. Give these guys another album or so and they should be making some definitive waves in the metal community.