Soilwork – Beyond the Infinite (Victor Entertainment) 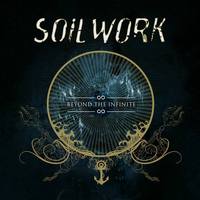 Last year, Soilwork really came out of the gates with their double-album The Living Infinite. The double disc format truly allowed them to test some new waters (as well as revisit some old ones) and was this writer’s number one album of 2013. In short, it was their strongest release in many years. Earlier this fall, the band released a collection of songs that failed to make it onto said release, cleverly entitled Beyond the Infinite. As someone who has followed the band since The Chainheart Machine was first released, there’s always been the completionist need to get ahold of every Soilwork track that’s been served to the public. So what could go wrong with some leftovers from arguably one of their best albums?

There’s nothing particularly wrong with Beyond the Infinite, but much like the recently released (and similarly flavored) Carcass’ Surgical Remission/Surplus Steel, these are leftovers for a reason. The five tracks here sound every bit like The Living Infinite, yet don’t seem to hit all the same high water marks. The two that come closest are the opening “My Nerves, Your Everyday Tool” and closing “Forever Lost in Vain.” The former coming out with all cylinders firing with quite a memorable chorus and underlying melody and the latter echoing much of those statements and featuring a nice catchy solo towards the tail end of the track. The middle three tracks, “Resisting the Current,” “These Absent Eyes,” and “When Sound Colllides” all come across as enjoyable, but mostly retreading the same territory The Living Infinite covered.

For Soilwork fanatics, Beyond the Infinite is a worthwhile investment, but the casual listener will certainly not be missing much by avoiding the festivities here. B-sides in this case are simply that. The Living Infinite stood tall with 20 tracks; perhaps this is a wise way of remembering that sometimes more isn’t always better. Shouldn’t be too much longer before Soilwork begins writing a new album anyways right?