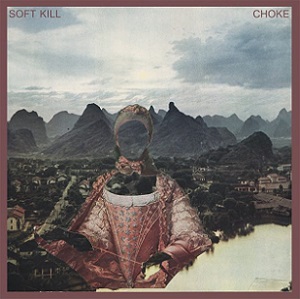 ”Anyone who compares us to Joy Division is a bored and sad human.” Okay, then. Won’t go there! Such are the words from Soft Kill vocalist/guitarist Tobias Sinclair in a recent interview with CVLT Nation upon being asked of the band’s main influences. The Portland, OR-based band is obviously of the dark Goth variety, but finds itself on Profound Lore, a label who has expertly cornered the market on subversive, abyssal death metal. Yet as recent dark-wave/post-punk acts LowCityRain and Publicist UK have proved, there’s plenty of room under our metallic umbrella for a band like Soft Kill, who have turned in a tantalizing album in the form of Choke.

Soft Kill are on point with the album’s first song, “Whirl.” Propelled by a humming Goth dance beat (and synths) and Sinclair’s casual vocal display, “Whirl” resonates with its flagrant use of a dance beat and dark overtones. In a word, it’s a Goth masterpiece. Further trips down haunting, driving paths come by way of “Wake Up,” where Sinclair is perhaps at his most miserable, and “Lost,” the song with the most bravado and swing in the bunch. Elsewhere, the dreamy “I’m Beside You” unveils a cascade of forlorn, The Cure-like chord movements, while “Feel of the Knife” provides additional moments of post-‘tude and busy drumming. (Mark Burgess of Chameleons fame also pops up on “I’m Inside You.”)

Because Profound Lore rarely works with bands like Soft Kill, there’s sure to be extra interest piqued, as if, ‘Why would a top-rung extreme metal label waste its time with a darkwave band?” The answer is quite obvious across Choke, which feels less of a tribute to the ‘80s Goth sound and more of an album filled with guilt, oppression, and out-and-out misery.