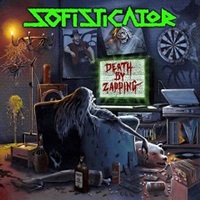 Humorous lyrics within thrash parameters probably began in part due to the crossover success of Anthrax side project S.O.D. in the 1980’s – and now that the floodgates have opened, acts like Italy’s Sofisticator wish to add their take to the landscape. The five-piece since 2009 take on society issues with parody and tongue-in-cheek perspective, unleashing a thrash assault straight from the Bay Area meets Anthrax perspective. Slayer and Exodus represent two other influences in the wheelhouse of the up tempo drumming, chugging rhythmic-oriented riffing and gang choruses that comprise the majority of their 13 track album foundation.

Assuming nicknames like Popi (not David Ortiz) on guitar, and the exciting rhythm section of Atomik Bahnhof on bass plus Crudelio Von Füst bashing the drums, Death by Zapping mixes things up between straight ahead, punchy fare such as “Channel 666” and “Quiz of Death” with the occasional mid-tempo or more musically adventurous arrangement such as the double shot of “Dark Side of Luna Park” and stealth mood changer “Who Saw Him”. Remembering the importance of separating sounds instead of engaging in a loudness war helps Sofisticator in the long run, as the bass rumbling has a lot of D.D. Verdi/Frankie Bello thump. And who wouldn’t want to hear a facsimile of Beelzebub reading the darkness of the day through the stop gap cut “666 News”?

And then there’s the hoarse, speedy nature of Disossator handling the microphone/word duties. He’s not the worst vocalist I’ve heard in the genre, but his semi-moaning, weak Tom G. Warrior meets clearer John Tardy drawl can drag the laugh parade for “Rot – Wash & Roll” or “M.C.S.” down unintended paths. This material would probably engage more listeners if Sofisticator considered a more potent Zetro/Chuck Billy–like roaring presence, because musically the happier riffs for “Great Strike” and the semi-Forbidden-ish guitar strains that open “Walter Texas Thrasher” prove the quintet aren’t spring chickens at their instruments.

Lich King from my neck of the woods are one of the best at this humor-laden crossover thrash style, but Sofisticator got the funny bone tickling and the hair on edge musically a time or two – so take this passable but not exemplary product for what it’s worth.