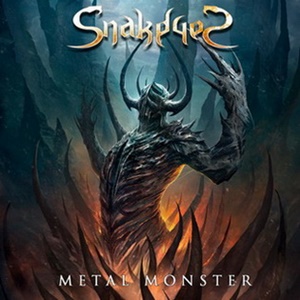 Although Spanish heavy metal act SnakeyeS appears to be a relative newcomer (starting in 2013) – three of the members have decades of seasoning through Sphinx, who released five full-lengths during their career. Romanian vocalist Cosmin Aionită fills out this lineup – as the group’s second album Metal Monster showcases a firm grasp of double bass-oriented heavy metal, the type that propels Primal Fear, Judas Priest, Accept and its offshoots into the hearts of the old and young.

Full throttle power riffing pairs up with Carlos Delgado’s fleet of feet kit work to make an impressionable mark upon early airings of “Into the Unknown” and “Cyberkiller” – the type of songs that elevate the energy level at peak volumes. Larger than life twin harmony principles from Justi Bala and Jose Pineda (the latter performing double duty on bass) drive home specific hooks and harmonies throughout the record – it’s easy to carry home the main melody for the title cut as well as the Malmsteen-esque “Facing the Darkness” in that regard. Keeping most of the tracks in a focused pocket of four to five-minutes, an epic like “Rise Up (The Red Plague)” at 8:15 gives SnakeyeS a chance to stretch their musicianship muscles, the mid-section very serene in its Iron Maiden-esque flavorings before churning up the prolonged instrumental/lead break section that is a three-part bass/guitar dream for cultural mavens (including a bass solo no less).

Cosmin may not necessarily be the smoothest vocalist in the heavy metal game – but his grit and powerhouse voice gets the job done very efficiently. If forced to pin down a comparison, it’s got the spirit of Rob Halford channeled through Andy B. Franck (Brainstorm) – making “Evolution” and the mid-tempo crunchy “Your Own Shadow” two of his best representations of solid mechanics plus knowing how to keep things in his sweet spot range. Rolling the dice with cover art that gets the job done, SnakeyeS keep the heavy/power riffs flowing for Metal Monster – sure to appease those who love Teutonic-flavored, Priest-inspired output.