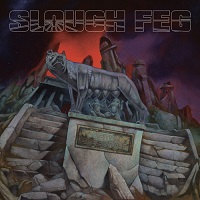 Practically an institution for vintage metal of the substance-laden, storytelling kind, San Francisco’s Slough Feg veered off from their traditional every-other-year release schedule for Digital Resistance. Last heard from via 2010’s The Animal Spirits, the band were able to get their hard-to-find early releases reissued via Metal Blade, who are also handling this album, sure to give Mike Scalzi and friends a broader platform. Coupled with the album’s overriding theme of resistance toward technology, and it’s one of the year’s first real gems.

The band’s sound – a throwback to late 70’s proto, roots metal (i.e. pre-subgenres) – has developed more of an identity in relation to their early days as The Lord Weird Slough Feg. Many (rightfully) cite 2005’s excellent Atavism as the marker for modern Slough Feg, and they’re not too far off, but some of those songs (and even those on 2007’s even better Hardworlder) had some extraneous ideas, a lot of which can’t be found here. So it’s simple: Slough Feg writes character-filled songs with dashes of melody (the spaghetti western-inspired “Habeous Corpsus” and “Curriculum Vitae” instantly come to mind), without the fat, and even work outside standard songwriting conventions. And there’s action afoot, whether it’s the momentous build-up on“Ghastly Appendage,” or the snappy “The Price is Nice,” these songs hit the bulls eye.

Guided by the gritty vocals of Scalzi (who is at his best on homespun tumble of “The Luddite”), Slough Feg’s appeal is quite apparent; they’re one of American metal’s most recognizable bands, well deserving of the cult status they’ve worked so hard to achieve. As it stands with Digital Resistance, they’ve just about outdone themselves, which is saying a lot…their catalog is riddled with albums any wise and/or forward-thinking lackey would enjoy.